As you identify less and less with the "me", you will be more at ease with everybody and with everything. Do you know why? Because you are no longer afraid of being hurt or not liked. You no longer desire to impress anyone. Can you imagine the relief when you don't have to impress anybody anymore? Oh, what a relief. Happiness at last!
Anthony de Mello

Compassion automatically brings happiness and calmness. Then, even if you receive disturbing news, it will be easier to take, as your mind is still..
Dalai Lama

The more you have, the more you are occupied, the less you give.
Mother Teresa

One in soul, you and I

A moment of happiness,
you and I sitting on the veranda,
apparently two, but one in soul, you and I.
We feel the flowing water of life here,
you and I, with the garden's beauty
and the birds singing.
The stars will be watching us,
and we will show them
what it is to be a thin crescent moon.
You and I unselfed, will be together,
indifferent to idle speculation, you and I.
The parrots of heaven will be cracking sugar
as we laugh together, you and I.
In one form upon this earth,
and in another form in a timeless sweet land.
Mevlana Rumi

If people become better Hindus, better Muslims, better Buddhists by our acts of love, then there is something else growing there.
Mother Teresa

Basically, a human being is a social animal. So, if you create some short moment of happiness for people, you get deep satisfaction.
Dalai Lama

I love all religions, but I am in love with my own.
Mother Teresa

Even a happy life cannot be without a measure of darkness, and the word happy would lose its meaning if it were not balanced by sadness.
Carl Jung

I don't claim anything of the work. It is his work. I am like a little pencil in his hand. That is all. He does the thinking. He does the writing. The pencil has nothing to do with it.
Mother Teresa

Chaturanga Dandasana can be a very strong pose for some people and is often practised in a way that is quite tough on the shoulders. I have noticed in some of my classes that there is a tendency for some students to come from plank pose into chaturanga and lift the backside, causing the shoulders to drop forwards towards the floor. I am not sure if this is a particular style that is being introduced by some teachers or if the momentum caused by this “sweeping action” makes the pose feel easier for some people.

What I do know is I am seeing more shoulder injuries as a result of the repetition of this particular style. When the backside is lifted in this way, it is quite difficult to engage bandhas and use your core belly strength, thus increasing the risk to the lower back. With the shoulders in this position, there is a greater risk of impingement of the rotator cuff tendons, leading to tendonopathy and pain.

In my opinion, it is better to drop the knees to the floor if you do not have the strength in the shoulders and triceps, or alternate the full pose with this variation whist you gain strength. If you have developed shoulder pain and you practice chaturanga on a regular basis, get your teacher to look at your technique as this may be the reason.
at December 11, 2009 No comments: Links to this post

This much is certain: when a man is happy, happy to the core and root of beatitude, he is no longer conscious of himself or anything else.
Meister Eckhart I am feeling tired and although burn out is probably a bit of an exaggeration, my body and mind needs a bit of a rest from teaching yoga. I am very fortunate to do a job I absolutely love… Having a yoga practice of my own enables me to stay in touch with what is going on in my body and to be aware when I need to take a break.


I think people sometimes have a preconceived idea that yoga teachers all wander around in a haze of peace and love and that life’s ups and downs do not affect them. As with all the teachers that I know, this is not quite how it is. We are human beings with human failings; we get injured, we get parking tickets, held up in traffic, etc... . The key is to know when you need to draw back a bit, when you need to concentrate on your own practice and really connect with your inner-self. Compassion for oneself enables compassion for others.

For me to be able to teach yoga, I have to practice all facets of yoga, including Ahimsa (non-harming). I am off on holiday to recharge my batteries. I will rest, read and spend time with my family. I will practice yoga for me, I may even attend a few yoga classes/workshop, but – then again - I might not. I know for sure that when I come back, I will be ready to share my yoga practice again.

A friend sent me this today:-

“Our daughter-in-law, Emily (MacInnes) Somers, created, directed and choreographed this in Portland last week for her Medline glove division as a fundraiser for breast cancer awareness. This was all her idea to help promote their new pink gloves. I don’t know how she got so many employees, doctors and patients to participate, but it started to really catch on and they all had a lot of fun doing it.

When the video gets 1 million hits, Medline will be making a huge contribution to the hospital, as well as offering free mammograms for the community. Please check it out. It’s an easy and great way to donate to a wonderful cause, and who hasn’t been touched by breast cancer?”.

See God in every human being. When I wash the leper's wounds, I feel I am nursing the Lord Himself. Is it not a beautiful experience.
Mother Teresa 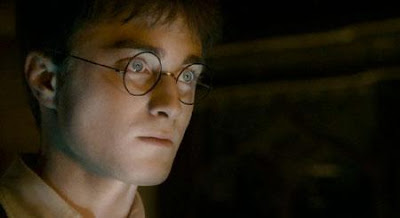 My daughter recently meet Daniel Radcliffe of Harry Potter fame and said what a charming unaffected young man he is. I thought I would share a (what I think is funny) conversation that she overhead from a couple that joined them in the room.

Woman: “Look there, that man from the telly”

Man: “What? Is he in Eastenders? Coronation St?” . (He then proceeded to name various TV shows)

Fortunately Harry Potter did not hear this conversation, but from what I have been told, he too might have found it funny.
at December 09, 2009 3 comments: Links to this post

Your grief for what you’ve lost lifts a mirror
up to where you’re bravely working.
Expecting the worst, you look,
and instead
here’s the joyful face you’ve been wanting to see.
Your hand opens and closes and opens and closes.
If it were always a fist or always stretched open,
you’d be paralyzed.
Your deepest presence is in every small contracting
and expanding,
the two as beautifully balanced and coordinated
as bird wings.
Rumi

Within the framework of the Buddhist Path, reflecting on suffering has tremendous importance because by realizing the nature of suffering, you will develop greater resolve to put an end to the causes of suffering and the unwholesome deeds which lead to suffering. And it will increase your enthusiasm for engaging in the wholesome actions and deeds which lead to happiness and joy.
Dalai Lama

The resistance to the unpleasant situation is the root of suffering.
Ram Dass

To see the universal and all-pervading Spirit of Truth face to face, one must be able to love the meanest of all creation as oneself.
Gandhi

The love that you withhold is the pain that you carry.
Ralph Waldo Emerson

I have just returned from a wet and windy weekend in Lyme Regis. The reason for the trip was to celebrate Christmas with family, albeit somewhat prematurely, as we will not be able to get together over the festive period. This year, we will be spending Christmas in India (the tropical paradise of Goa to be precise), where I hope to practise lots of yoga and spend some quality time with my family. For one reason or another, this has almost been mission impossible this year.

But getting back to the subject at hand... For those of you who have never been to or never heard of Lyme Regis, it is located in western Dorset, (approximately 55 miles west of Bournemouth; 25 miles east of Exeter, in neighbouring Devon, and 25 miles south of Yeovil in Somerset), on the stretch of the English coastline known popularly as the Jurassic Coast. It has been given this name due to the amazing amount of prehistoric fossils that have been discovered in the area and which has led to it being declared a UNESCO World Heritage Site.

The town has one of the oldest harbours in the country and is steeped in history. Tales of smugglers and secret passages are rife, and it is also the setting of several novels by Jane Austen. The author John Fowles used to write in his house that overlooks The Cobb (harbour) and one of his famous books, The French Lieutenant's Woman, which was subsequently made into a film starring Meryl Streep and Jeremy Irons, was set and shot on location in Lyme Regis and its surrounding under-cliffs. Fowles also penned The Magus; as well as one of my favourite scary books, The Collector; which I read when staying in a cottage in the town and which scared me half to death.

I was playing around with my new camera during the weekend, so here are a couple of pics of wintertime on the English seaside. I especially like the photo of the two elderly women enjoying their lunch on the seafront, despite the force 9 gale… Oh, so British! I would recommend visiting Lyme Regis during winter, as you can enjoy the peace and beauty of the place. It is like taking a step back in time! 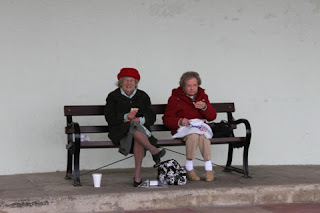 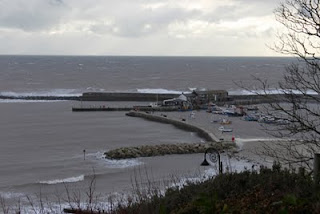 Here is a video of Joni Mitchell performing Big Yellow Taxi live in concert way back in 1970. Virtually 40 years later... (oeer, not showing my age :$ ) her words ring truer than ever... "Paved paradise and put up a parking lot". I, for one, definitely prefer having spots on my apples and keeping the birds and the bees. Enjoy!
at December 03, 2009 No comments: Links to this post

If you judge people, you have no time to love them.
Mother Teresa

Past and future are in the mind only - I am now.
Sri Nisargadatta Maharaj