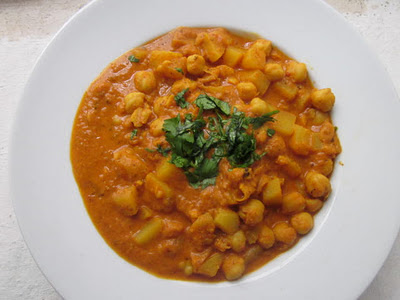 Here is another great recipe form Adam and Theresa over at The yogi Kitchen, which is soon to be called "Keen on food".

Adam and Theresa are currently practising yoga in Mysore India so follow their food journey at the above link. This particular item was posted during their stay in Tarifa, Spain, where they taught yoga and hosted international yoga teachers.

Chickpeas are the ubiquitous bean of a vegetarian diet, but here in Andalucía, we are still amazed at the freshness, plumpness and largeness of the ones here.  Vindaloo is a Goan dish, originating when the Portugese brought chillis to the area and introduced cooking with wine, traditionally it is served with pork, but here we have used chickpeas and vinegar instead of the meat and wine, to an effect that I have to say is one of my new favourite dishes.

It has been a bit of a chilly week here in Tarifa, with temperatures dipping to 10 C, and I was craving the combination of chickpeas with potatoes, in a spicy dish, tomato and cream is one of my all time best type of sauces and add vinegar... Well all of the boxes are ticked.

We are almost out of chapati flour, so we ate this with soft white rolls like the Indian pav.  Pure heaven.

The recipe was found on the internet and credit was given to Steven Raichlen, thank you Steven.