The hugging guru Amma is currently here in Mysore India. It is said that she has embraced over 32 million people, spreading a message of love and compassion.

Whilst I didn't actually get a hug myself (I couldn't wait until midnight), it was amazing to be part of this huge spiritual gathering and Amma was clearly offering hope to a lot of people both rich and poor. Amma is also the guru made famous by the book and film "Eat, Love, Pray" in which her ashram appears. 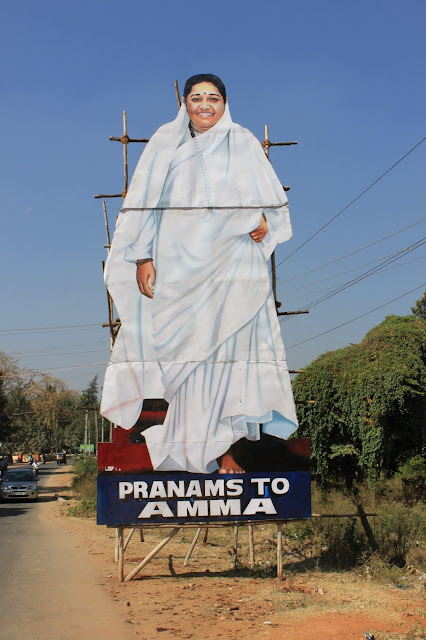 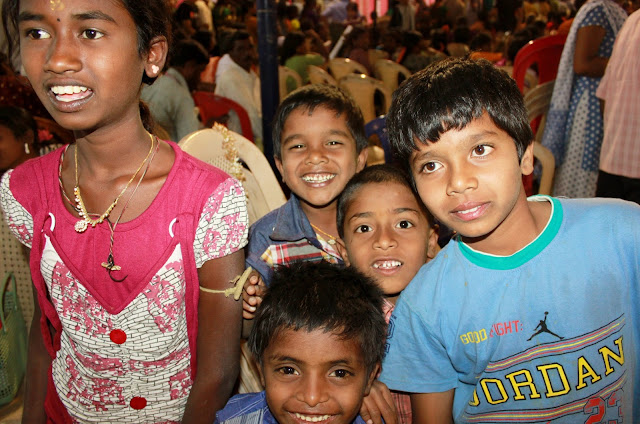 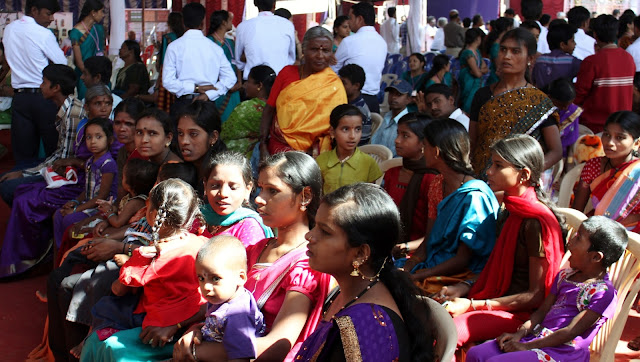 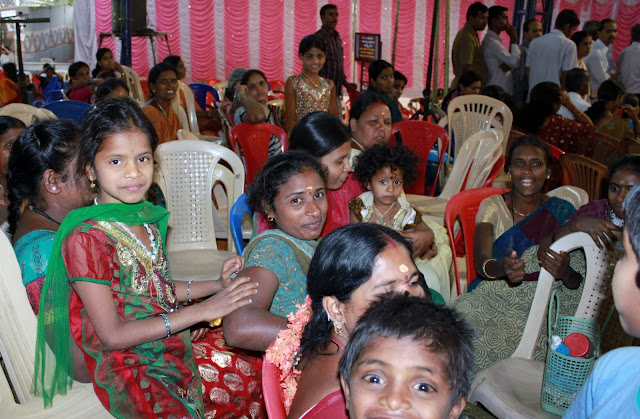 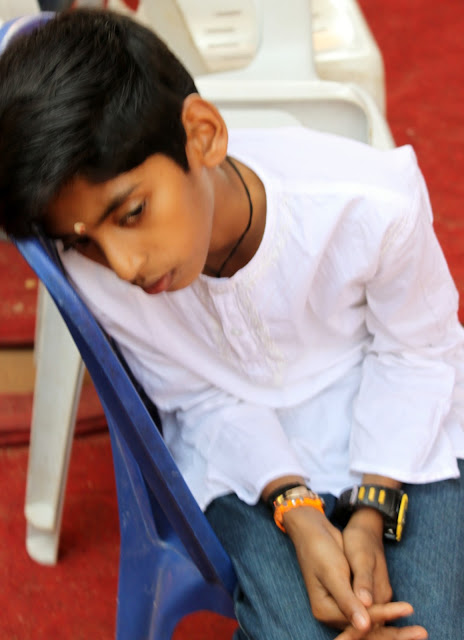 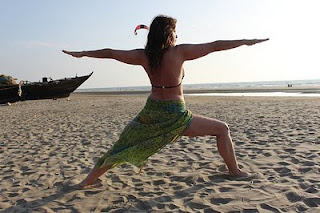 Following the recent film Eat Love pray, I thought I would post an item on my favourite yoga retreat in India, not to be confused with an Ashram in India (as depicted in the film).

Purple Valley yoga retreat is a beautiful peaceful retreat set off the beaten track in Assagao, Northern Goa, where you can practice yoga with some of the world’s most highly respected Ashtanga yoga teachers. It is situated close enough to be able to venture into other parts of Goa, but feels like a cocoon if you wish to stay put on the retreat.

The beautiful shala (studio) is very peaceful and is situated at the far end of the retreat. The amazing birdsong you hear while practising yoga is just wonderful. 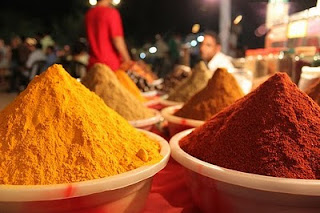 The accommodation is within two main houses or in small cottages located in the gardens. You can share rooms or pay a nominal fee to have your own room, if there is space available. I personally choose to take my own room, as I share my life with a family on a daily basis and Purple Valley is a bit of “time out” for me.

It is a very safe environment for women travelling on their own in India. You can sip post-yoga-practice fruit juices beside the pool or enjoy an ayervirdic massage or treatment on-site. The food is delicious and vegetarian; with copious amounts of fresh fruit available.

The teachers, as already mentioned, come from all around the globe; as do the students. Teachers in the forthcoming season include: David Swenson, Kino MacGregor, John Scott, Phillipa Asher, Dena Kingsberg, Petri Raisanen; to name but a few. My own favourite yoga teacher Nancy Gilgoff will not be in Goa this year, but will hopefully return next season.

I have visited other retreats around the world but Purple Valley has what I’m looking for: fantastic yoga teachers, great food, comfortable accommodation, sunshine... all set in the beautiful country that is India.

Here is the trailer of Eat Pray Love, which will be released in cinemas tomorrow.

Eat Pray Love: a quest for change and happiness

Eat Pray Love is a film about a woman's quest to travel and heal herself after a messy divorce.

The film is beautifully shot and Julia Roberts does a pretty good job of displaying the emotional pain of the character Liz Gilbert. She gives up her life as a successful writer in New York and sets off on her travels to Rome, India and Bali in an attempt to change her life.

Liz Gilbert took a risk and took herself way out of her comfort zone, she explored not only different cultures and countries, but also took a look at herself on a deeper level

I too have travelled a lot in my life I have stayed on retreats in India, hugged trees in Greece, practised headstands in the Sahara… Yes, travel has been amazing, and some of the people I have met on these journeys have had a big impact on my life.

My inner journey started off more than 20 years ago in Australia, where I had a respiratory arrest after suffering an acute asthma attack. I stopped breathing and had to be resuscitated. Three months later, one of my sisters experienced exactly the same thing at home in London. She, however, did not survive. "Boom!" my world shifts.

When you grieve, be it for a marriage (as in Liz Gilbert's case) or through bereavement (as in mine), you go on a roller coaster ride of emotions: anger, guilt, self pity, regret; asking yourself repeatedly "What if I could have done something to change this", as well as lamenting over things you cannot change.

I took myself off on a short break, on what was called a "holistic holiday". It was here that I met a yoga teacher who opened a door for me and I tentatively walked through it.

On returning home, yoga and meditation started to creep into my life. It was a slow process. I tried different teachers and methods and - like Liz in the film - I went off to India and California to practice yoga (subsequently becoming a yoga teacher).

What did I discover on my travels?

I discovered that wherever I went, I took myself with me and that I wasn't leaving behind any of the feelings. So, whether it were on an exotic beach or on the comfort of my own sofa, I had to look deeper within myself, find self-acceptance and compassion; but, above all, I had to let go of the past as it was holding me back.

Letting go frees you up to all possibilities. In Liz Gilbert's case, when she lets go of the pain of her marriage break up and finds compassion and love for both herself and her ex husband, her life transforms. You could say that it is an inside job with outside guidance.

The journey continues... It takes a lot of courage to step out of the darkness and into the light.

Images taken from Eat Pray Love, courtesy of Sony Productions
at September 09, 2010 No comments: Links to this post

Email ThisBlogThis!Share to TwitterShare to FacebookShare to Pinterest
Labels: A quest for change and happiness, Eat Pray Love 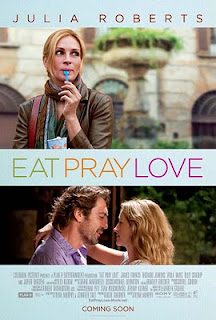 Last night I attended a screening of the film Eat Pray Love, which will be released later this month. The film is an adaptation of the memoir by Elizabeth Gilbert, a successful writer (played by Julia Roberts), and her struggle to find what she really wants in life. She embarks on a journey around the world that takes her to far-flung and exotic destinations such as Rome (Eat), India (Pray) and Bali (Love) and which turns into a quest for self-discovery.
I had read the book previously and was not massively overwhelmed by it, but I was eager to see how it would be translated to the big screen in true Hollywood style. After watching the film, myself and a group of other bloggers were invited to discuss the film. It was interesting to hear other people's views of what is essentially one person's personal journey.
I don't want to spoil the plot, so I will leave it you to go and see the film and come to your own conclusions. The film will hit UK cinemas on the 24th of September, but in the meantime, I will leave you with the trailer. Enjoy!