Yoga and back pain: study shows yoga to be more effective than conventional medical treatments

Interesting article about practising yoga in order to relieve back pain in The Times today by Hannah Devlin. 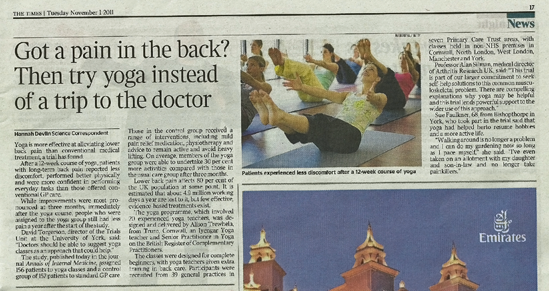 After a 12-week course of yoga, patients with long-term back pain reported less discomfort, performed better physically and were more confident in performing everyday tasks than those offered conventional GP care.

While improvements were most pronounced at three months, immediately after the yoga course, people who were assigned to the yoga group still had less pain a year after the start of the study.

David Torgerson, director of the Trials Unit at the University of York, said: "Doctors should be able to suggest yoga classes as an approach that could help."
The study, published today in the journal Annals of Internal Medicine, assigned 156 patients to yoga classes and a control group of 157 patients to standard GP care. Those in the control group received a range of interventions, including mild pain relief medication, physiotherapy and advice to remain active and avoid heavy lifting. On average, members of the yoga group were able to undertake 30 per cent more activities compared with those in the usual care group after three months.

Lower back pain affects 80 per cent of the UK population at some point. It is estimated that about 4.9 million working days a year are lost  to it, but few effective, evidence-based treatments exist.

The yoga programme, which involved 20 experienced yoga teachers, was designed by Alison Trewhela, from Truro, Cornwall, an Inyegar Yoga teacher and Senior Practitioner in Yoga on the British Register of Complementary Practitioners.

The classes were designed for complete beginners, with yoga teachers given extra training in back care. Participants were recruited from 39 general practices in seven Primary Care Trust areas, with classes held in non-NHS premises in Cornwall, North London, West London, Manchester and York.

Professor Alan Silman, medical director of Arthritis Research UK, said: "This trial is part of our larger commmitment to seek self-help solutions to this common musculoskeletal problem. There are compelling explanations why yoga may be helpful and this trial lends powerful support to the wider use of this approach."

Sue Faulkner, 68, from Bishopthorpe in York, who took part in the trial said that yoga had helped her to resume hobbies and a more active life.

"Walking around is no longer a problem and I can do my gardening now so long as I pace myself", she said. "I've even taken on an allotment with my daughter and son-in-law and no longer take painkillers."