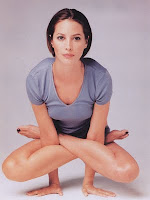 I sometimes think that people in the public eye often get a bit of a raw deal about practising yoga. Well-known yoga students are often referred to as “yoga gurus” or are mocked for having an opinion about yoga, as if being a celebrity does not entitle you to a spiritual journey or makes you an expert on the subject.

One such personality is the model Christy Turlington. She, of course, has made a living from how she looks. She has also embarked on a yogic path and has studied and written about the subject in a very in-depth way.

Her book Living Yoga is a beautifully written and illustrated. She talks about her life, in what is considered to be a superficial profession, and how it fits in with her yogic lifestyle. She also talks about being a practising catholic and, having studied theology, she has a great deal of knowledge on the subject of religion and why it does not impose on her yoga and vice versa. She has visited Ashrams and attended The Kumbh Mela in India. From her photographs you can see she is a dedicated yogi. The poses she demonstrates show that she practises what she preaches. If you practice yoga you will know what discipline it takes to achieve some of these asanas.

In my opinion it is always worth looking behind the celebrity tag to see what else is on offer.

All comments are moderated. If you would like to leave a comment, you can do so below.