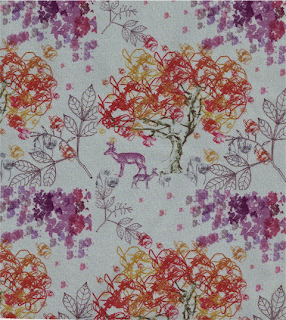 Thought I would blog a sample of my daughter Cally’s print design. She is a first year student at Central St Martins in London, where she is studying textile design. This is her first print design since she started in October.

She has created the image from scrap. The original theme was recycling, so the tree design was created by using old cassette tape and laminating it. If you look closely you can see small flowers that were created by melting old wax and moulding into flowery shapes; blocking my sink in the process!

She spent an afternoon at a scrap yard in Hackney collecting other people's bits of old junk (a lot of which sat in my kitchen for a few weeks) and creating beautiful things from rubbish.

Her final piece on her foundation course was inspired by timorous beasties and depicted a London binge-drinking scene, using colours which - at first glance - would make you think of a more picturesque outlook, but were, in fact, much more ominous on closer inspection. 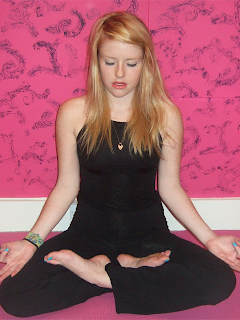 Art students have pretty hectic schedules, especially at CSM. Projects often run back to back and carrying heavy portfolios and art materials can take its toll physically. My daughter has taken up yoga and often comes to my classes. Poses that open the upper back and strengthen the neck are really beneficial to her; as are poses such as the downward facing dog, where the hands are spread. Sitting down to paint or weave can cause a slight kyphosis of the spine (rounding of the upper back) if left unchecked. Repetitive strain symptoms can also occur in the hands from holding paint brushes for long periods of time.

Cally finds Ujjai breathing very helpful on the tube into Holborn. Travelling during rush hour can be pretty stressful and yogic breathing can really help her to keep calm. Practising Ujjai breath loudly on the Tube can also clear her a space as most people find it quite odd… A good tactic, I reckon. Here she is in the Lotus position (Padmasana), sitting in front of one of her designs.
at November 18, 2009

All comments are moderated. If you would like to leave a comment, you can do so below.